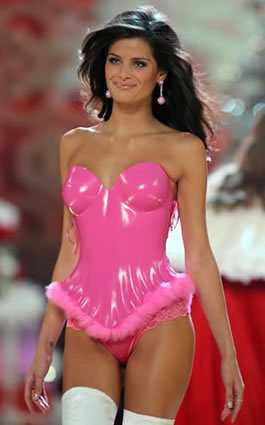 Isabeli Bergossi Fontana (born July 4, 1983) in Curitiba, Paraná, Brazil. In 1996 she made it to the finals of the Elite Model Look when she was just 13 and in the following year she moved from Southern Brazil to Milan, Italy, to start her modelling career. In 1999, at the age of 16, she appeared in the Victoria's Secret lingerie catalogue. The shoot caused controversy, as Victoria's Secret stated that they would not use girls younger than 21. Soon after the Victoria's Secret shoot, she was signed by Versace, Ralph Lauren and Valentino. Since 1999 she has modeled for Sports Illustrated Swimsuit Issue, Marie Claire, ELLE, Vogue, Harper's Bazaar, Numero, i-D, Arena and many others.

Currently Isabeli can be seen in the F/W campaigns for Versace, Roberto Cavalli Valentino & H&M. Isabeli is the current face of Viktor & Rolf's fragrance Flowerbomb. In 2008, she made her debut on the Forbes The World's 15 Top-Earning Models list at place 11, having earned $3 million.

Fontana's Tattoos consist of her son's name (Zion) tattooed on her back. A tattooed rose in thorns wrapped around her left ankle, a word tattooed inside her lower lip, a butterfly tattooed on her butt cheek and a Cancer star sign (circle enclosing a cross) on the inside of her right wrist. She is adding to her collection of ink all the time.